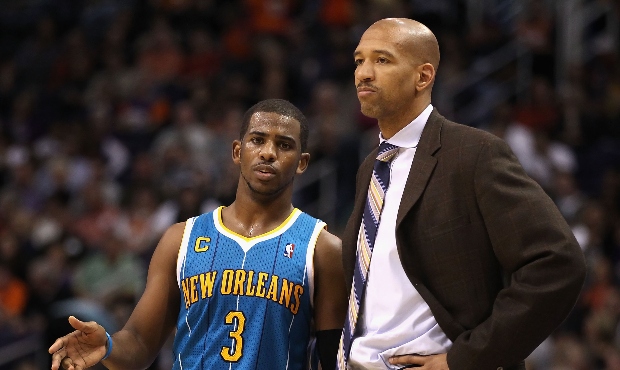 At the beginnings of what was one of the “success stories” of the season for Arizona, there is first a story of friendship, that linking the coach of the Suns, Monty Williams, to the one who was going. become her captain on board, Chris Paul.

When it comes to changing course after a breathtaking season with OKC last summer, CP3 did not take their decision lightly. Every aspect is taken into account, and beyond the workforce of Phoenix already in place, the presence of Monty Williams was very important.

The two have known each other since 2010, when coach Williams landed his first job as head coach at the Hornets, then based in New Orleans where Chris Paul was already rife as the league’s referenced point guard. The 2010-2011 regular season (46v-36d, 7th place) then the playoffs (elimination in the first round) had not hit the headlines. CP3 had even left the ship in the wake to join the Clippers, after an exchange with the Lakers canceled by… the NBA. But a beautiful friendship was born.

“When I got there Chris and David West had been through a lot. They made it very clear to me and our team that they were going to fight and behave like the pros, but that they were just going to move on then ”, he recalled recently in the « Woj Pod ». Chris and I had a great working relationship. There were times when I coached her too hard, or where I was typically myself, but our relationship never changed. In fact, when he left, we kept in touch. He was still watching us play. When we were playing against each other, we were always talking in the hallway. I also saw him at Team USA events (where Monty Williams was assistant from 2013 to 2016). Our relationship has not changed, it has grown stronger ”.

Throughout his career, Chris Paul has strived to demonstrate righteousness and loyalty. The way he’s kept in touch with one of his former coaches over the past decade is just one example.

“I remember my daughter telling me Chris Paul had looked for her in the All-Star game. My son Elijah was at Team USA camps, and Chris was one of the few who came to shake his hand. He then came back to tell me: « Coach, you would be so proud of him, he looked me in the eye when he shook my hand », he added, before recalling the impact that the player may have had on his teams. “I’m not ashamed to tell anyone that I was most successful when Chris Paul was my starting point guard. I’m not very smart, but I’m smart enough to know that Chris is helping you win a lot of games ”.

The last episode of this new collaboration was particularly hard since the Suns failed in the final while Chris Paul, hit on the wrist, could not evolve at his best level. But this time around, Monty Williams and CP3 will be back together for next season, with a vengeful feeling that may well lead Phoenix to the top again.

“Chris was injured during the Clippers series, but he never looked for an excuse. I am sure that everything he has heard will motivate him in his summer training », concluded Coach Williams. [Podcast] Duel of mystery players! (including the top 5 NBA striker…forgotten?) A heat stroke as a trigger for Anfernee Simons