Formula 1 has updated the program for the Saudi Arabian Grand Prix, the first edition of the F1 race to be held in Jeddah. In a week, the teams will be installed there and the first free practice will be about to take place.

We now know the DRS areas of the brand new route, which is located on the corniche of the Saudi city. And not surprisingly, the areas planned to facilitate overtaking will indeed be 3 in number.

The first will be between turns 20 and 22, in a very fast part but not straight. Its detection zone, on the other hand, will intervene between turns 17 and 18, before the long part of full load leading up to the braking of turn 22.

The second zone will be located on the dyke of the cornice, between turns 25 and 27. Again, this zone will not be straight. But interestingly, its detection point will be just before turn 22, that is to say at the exit of the previous DRS zone.

Likewise, the detection point for the third DRS zone will be just before turn 27, at the exit of the second DRS zone. The third will be located quite logically in the straight line of the pits.

It will be interesting to see if the fact that the detection of two of the zones is done after the use of the DRS will make it possible to better benefit from it. Note that on the F1 2021 game, the layout arrived about ten days ago, without the DRS zone of turns 20 to 22, but with an area between turns 12 and 13. 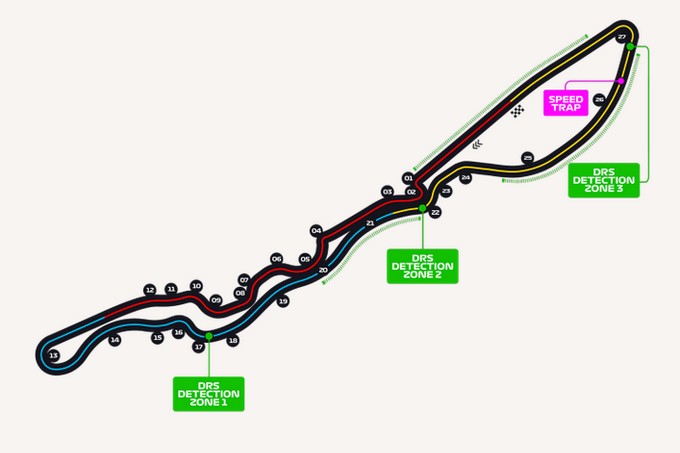 « How stupid! », Alonso rallied against Gasly after their crash